Python is one of the world’s top programming languages used today and Python training has become the most popular training across individuals. Training Basket’s Python Training & Certification course covers basic and advanced Python concepts and how to apply them in real-world applications.Python is a flexible and powerful open-source language that is easy to learn and consists of powerful libraries for data analysis and manipulation. Our Python training course content is curated by experts as per the standard Industry curriculum. The curriculum, coding challenges and real-life problems cover data operations in Python, strings, conditional statements, error handling, shell scripting, web scraping and the commonly used Python web framework Django. Take this Python training and certification course and become job-ready now.

Python is known for its general-purpose nature that makes it applicable in almost every domain of software development. Python makes its presence in every emerging field. It is the fastest-growing programming language and can develop any application.

Here, we are specifying application areas where Python can be applied. 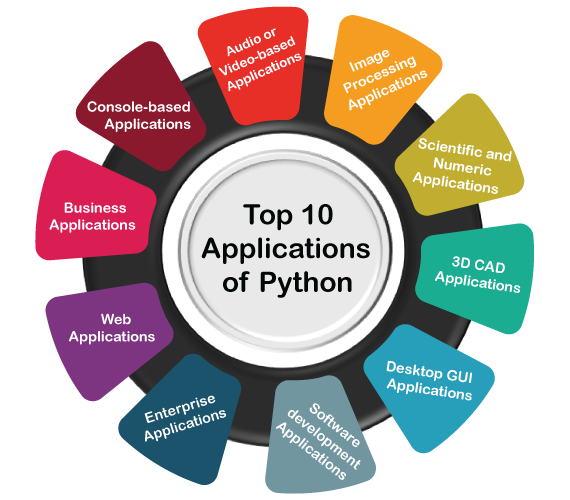 We can use Python to develop web applications. It provides libraries to handle internet protocols such as HTML and XML, JSON, Email processing, request, beautifulSoup, Feedparser, etc. One of Python web-framework named Django is used on Instagram. Python provides many useful frameworks, and these are given below:

The GUI stands for the Graphical User Interface, which provides a smooth interaction to any application. Python provides a Tk GUI library to develop a user interface. Some popular GUI libraries are given below.

Python provides many free library or module which helps to build the command-line apps. The necessary IO libraries are used to read and write. It helps to parse argument and create console help text out-of-the-box. There are also advance libraries that can develop independent console apps.

Python is useful for the software development process. It works as a support language and can be used to build control and management, testing, etc.

Implementing machine learning algorithms require complex mathematical calculation. Python has many libraries for scientific and numeric such as Numpy, Pandas, Scipy, Scikit-learn, etc. If you have some basic knowledge of Python, you need to import libraries on the top of the code. Few popular frameworks of machine libraries are given below.

Business Applications differ from standard applications. E-commerce and ERP are an example of a business application. This kind of application requires extensively, scalability and readability, and Python provides all these features.

The CAD (Computer-aided design) is used to design engineering related architecture. It is used to develop the 3D representation of a part of a system. Python can create a 3D CAD application by using the following functionalities.

Python contains many libraries that are used to work with the image. The image can be manipulated according to our requirements. Some libraries of image processing are given below.

In this topic, we have described all types of applications where Python plays an essential role in the development of these applications. In the next tutorial, we will learn more concepts about Python.

My instructor had sound Knowledge and used to puts a lot of effort that made the course as simple and easy as possible. I was aiming for with the help of the ZebLearn Online training imparted to me by this organization.

I got my training from Zeblearn in the Python Certification Training, I would like to say that say he is one of the best trainers. He has not even trained me but also motivated me to explore more and the way he executed the project, in the end, was mind-blowing.

Candidate’s Journey During Our Training Program

Choosing the right type of module for the training is half the battle & Our Team of experts will help & guide you.

Get Trained & Learn End to End Implementation from our Expert Trainer who are working on the same domain.

We Do make our student’s work on multiple case studies , scenario based tasks & projects in order to provide real-time exposure to them.